Shadow of the Colossus is the latest PS2 game from Japanese designer Fumito Ueda, also responsible for one of the most lyrical fantasy games, Ico, which takes place in a massive, darkness-haunted castle. In Shadow of the Colossus (set in the same world as Ico), the aim is to defeat sixteen enormous creatures, with the ultimate aim of harnessing their life-energies to bring back to life the hero's dead love. The giant Colossi take various forms, including human-shaped monsters, serpents, bulls, birds, and this peculiar, floating, finned creature that seems tantalising familiar: 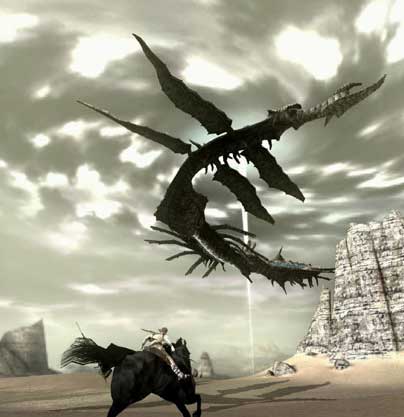 Still from Shadow of the Colossus

Could it be a shrowk? It's not often David Lindsay has any sort of impact on popular culture, so it may be a case of wishful self-deception, but here's Lindsay's description of his monstrous creation so you can decide for yourself:

Before many minutes he was able to distinguish the shapes and colors of the flying monsters. They were not birds, but creatures with long, snakelike bodies, and ten reptilian legs apiece, terminating in fins which acted as wings. The bodies were of bright blue, the legs and fins were yellow. They were flying, without haste, but in a somewhat ominous fashion, straight toward them. He could make out a long, thin spike projecting from each of the heads.