Edward Joseph was a sculptor, and son of the sculptor Edward James Physick (1829–1906), who was himself a son of the sculptor Edward Gustavus Physick (1802–1875), who was one of three sculptor-sons born to the — yes — sculptor Edward William Physick (1774–1862). The Physick family combined artistic accomplishment (Edward James, for instance, winning a gold medal from the Royal Academy in 1849 for his “Rape of Proserpine”) with successful business, in an age where there was a high demand for mortuary and memorial statuary. Visiak’s maternal grandfather, John Searcy (1813–1898), on the other hand, was confectioner to the Duke of Northumberland before moving to London and founding Searcys, a catering and restaurant firm still in business to this day.

Advert for E J Physick's services as a sculptor, from The Times, 1866

He was educated privately and at St Augustine’s School, Westminster (from the age of 10 to 13). The fact that two of his brothers, John and Frank (both of whom also attended St Augustine’s), were choristers at the Chapel Royal and sang, in 1893, at the wedding of Prince George, Duke of York (later to become King George V), gives some idea of the family’s standing, or at least its aspirations.

None of Visiak’s brothers seems to have become a sculptor (though two — John and Frank, again — would follow the family tradition on their mother’s side by heading Searcys in the interwar years, Frank actually rescuing the company from financial straits thanks to his independent success as a business- and statesman in Malaya). Visiak found a job with the Indo-European Telegraph Company as a telegraph operator, working for a brief (but unhappy) spell in their Manchester offices before returning to London.

When the 1916 Military Service Act introduced conscription for unmarried men between the ages of 18 and 40, Visiak (then 36 years old) registered himself as a conscientious objector. The Military Service Tribunal awarded him a certificate of exemption, but withdrew it the following year in light of the increasingly desperate need for soldiers. Visiak appealed the decision in March 1917, stating that his objection was “on grounds of Christianity”, and quoting Coleridge’s dictum that the faith “commands its disciples to be perfectly non-resistant.” “Non-resistance to evil”, he went on to say, “is the most profound of all metaphysics”, and added his belief that “war produces war”, and that “all European wars are inter-related and inter-connected by a subtle system.” In addition, he resigned his post at The Indo-European Telegraph Company, as the work he was doing there was about to become classed as war-work, and Visiak objected to any activity in support of the war. The tribunal accepted his appeal, as long as he took on work of national importance. Visiak found himself work on a farm, but after a few months was signed off by a doctor for “a severe form of Neuralgia due to dental troubles”. Eventually, he was declared unfit for farm work and had to find himself something else, or risk revocation of his certificate of exemption. He found it with a Quaker charity, The Bedford Institute (known today as Quaker Social Action), helping both at their boys’ clubs and visiting poor and underprivileged boys at their homes. (This was considered work of national importance, as, according to the Institute, there was felt to be “a serious deterioration among the young people of the land since the outbreak of the War”.) The work was for 8 or 9 hours a day, including evenings, and was unpaid apart from expenses. This was accepted by the tribunal, and Visiak retained his conscientious objector status. 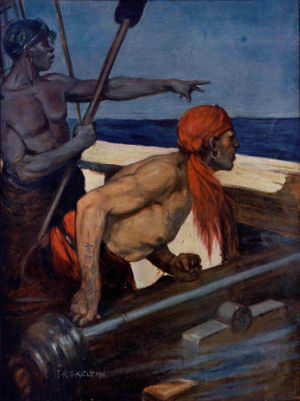 Following this, he worked as a teacher (at least until 1921), but at the same time made inroads into the area that would become the main focus of his life — literature and literary scholarship. He had already been publishing poetry, starting with Buccaneer Ballads in 1910, which had an introduction by John Masefield (Poet Laureate in 1930). Flints and Flashes followed in 1911, then The Phantom Ship and Other Poems in 1912, all following a nautical theme. (The sea was important for Visiak, it being one of the reasons he moved to Hove in later life.) 1916’s The Battle Fiends was, in part, Visiak’s response to the Great War. Meanwhile, in prose, he produced The Haunted Island, A Pirate Romance in 1910, and a collaboration, The War of the Schools, A Suburban School Tale in 1912, “a little story of a rivalry between three establishments”, with C V Hawkins. During this time he was also submitting poems, often very short ones, to periodicals such as The Graphic and The Daily News, some of which would eventually be collected in 1919 in Brief Poems. For all of his writings, he used the pen-name “E H Visiak”, this being an old variation of his family name, Physick.

Visiak was an inveterate writer of letters to the papers, often expressing a compassionate viewpoint on the events of the day. From 1910 onwards, he can be found writing against the death penalty, the force-feeding of suffragists, and “the insane arrogance of militarism” in Germany; but also on less controversial topics, such as the possible reduction in the thickness of books thanks to Edison’s idea of replacing paper with ultra-thin nickel sheets, and whether a 1923 pram race was harmful to the infants involved. In a 1939 letter to The Times, he suggests propaganda leaflets air-dropped into Germany be kept brief, to reduce the chance of people being caught reading them.

Visiak’s real literary success came in 1923, with the publication of his critical volume Milton Agonistes, A Metaphysical Criticism, which considered Paradise Lost as a tragedy in the classical sense. It was this volume, and such subsequent critical work as editing the Nonsuch Press edition of Milton’s works in 1938, producing The Portent of Milton, Some Aspects of His Genius in 1958, and The Mirror of Conrad in 1968, that made Visiak’s reputation and won him the civil list pension which meant he didn’t have to worry about money. He was, by this time, already part of the literary world, being included, for instance, at a Poetry Circle dinner at the Lyceum Club in 1921 (alongside Walter de la Mare and Edith Nesbit), writing articles for such periodicals as The Nineteenth Century and Notes & Queries, and giving lectures (one on the German Romantic writer Ludwig Tieck, for instance). 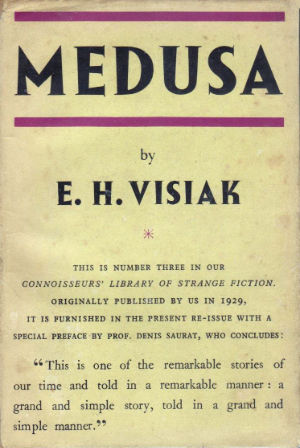 His friendship with David Lindsay began after reading The Haunted Woman when it was serialised in The Daily News in 1921. Visiak wrote to Lindsay at a time when Lindsay was in need of a sign that someone, somewhere, was responding to his work. Visiak then sought out A Voyage to Arcturus, and sent Lindsay copies of The Phantom Ship and The Haunted Island. In return, Lindsay shared his philosophical “sketch notes”, of which Visiak typed a copy and offered to show them to Walter de la Mare. Their correspondence seems to have continued until some time after 1924, when it lapsed, then revived in 1929, after Visiak lent A Voyage to Arcturus to the publisher Victor Gollancz (then in the process of bringing out Visiak’s weird sea-adventure, Medusa). As a result, Gollancz contacted Lindsay, who wrote to Visiak to thank him, also sending him a copy of The Adventures of Monsieur de Mailly.

They met for the first time in 1929, perhaps when Lindsay was visiting his sister, Margaret (living in Croydon at the time). After this, Visiak would often stay with the Lindsays in Ferring, and came to nickname Lindsay’s daughters “Day” and “Night” after their contrasting shades of hair. Visiak also contrived for Lindsay to be invited to a society evening in London, whose hostess was keen to meet “celebrities”. Lindsay (who was obviously not enjoying the event) fell asleep, but Visiak convinced the hostess he was in fact in a state of deep concentration.

He would go on to champion Lindsay’s work several times, including an article for Notes & Queries, “The Arcturan Shadow”, which became the introduction to the Gollancz reissue of A Voyage to Arcturus (when it, and The Haunted Woman, came out as part of the 1946 “Connoisseur’s Library of Strange Fiction”, which also included Visiak’s Medusa).

Visiak’s father died in 1921. His mother, Maude, lived with Visiak until her death in 1953. Throughout the 20s and 30s, he and his mother were in London, at 30 Cavendish Road, then 38 Rutland Park Mansions (both in Willesden), before moving to Hove by the 1940s, where Visiak would remain till his death in 1972. (His final address, 23 Pembroke Avenue, adjoins Pembroke Crescent, where David Lindsay lived.)

In 1968, Visiak produced a memoir of his early years, Life’s Morning Hour. He had always felt life was at its purest and truest in childhood, after which, with the coming of adulthood, things could never be the same. This is how the view is stated by Mr Huxtable in Medusa:

“This topic of childhood and the enchantment it casts, has powerfully worked in my thoughts, and was the ferment of my philosophy when first I became sensible of its loss and what a brave glittering robe was fallen from me into the past. It’s my first chapter of Genesis, which, in that story of lost Paradise, is a grand fable of the beginning of our life in this world; when we are innocently happy, or, as I may express this harmonious state, happily whole. There is as yet no rift to set body and spirit out of tune in their jangling spheres, and the elements are so mingled in us as that we may truly be called, in those eloquent words, living souls...” 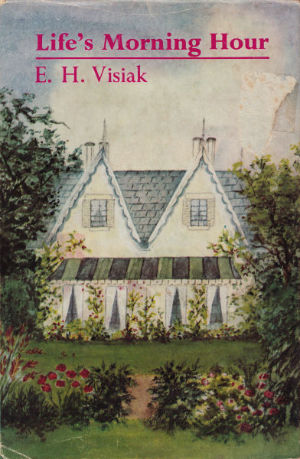 Around this time, Colin Wilson, reading a Gollancz reissue of Arcturus and finding the book puzzling, wrote to Visiak “for elucidation”. The two continued corresponding, and in 1967 Wilson received “an utterly miserable letter” from the older man, who, he concluded, “was dying of boredom”. Deciding Visiak needed a project, Wilson suggested they work on a biography of Lindsay together, and when it was found that J B Pick was planning a similar venture, they combined their efforts into The Strange Genius of David Lindsay, which came out in 1970. Of the three contributors, Visiak was the only one to have actually known Lindsay.

Visiak lived to the impressive age of 94. (Impressive, but not a Physick record, as his brother Frank Savill Physick — the one who rescued Searcys thanks to his success in Malaya, and who, incidentally, may have been instrumental in the UK’s adoption of the PAYE scheme of employee taxation — made it to 101.)

His Medusa became a sought-after “lost classic” after Karl Edward Wagner included it in a list of “The 13 Best Supernatural Horror Novels” in the June 1983 issue of Twilight Zone Magazine, leading many seekers after horror to try to track down this (by then) rare tome. Wagner perhaps oversold it:

“If David Lindsay had written Treasure Island in the throes of a peyote-induced religious experience... Well, if Coleridge had given Melville a hand on Moby Dick after a few pipes of opium...”

Colin Wilson, writing of the novel, also brings in a comparison with Melville:

“Medusa is an extraordinary book, and its style has no doubt prevented it from being recognised as a Kafka-esque vision; the Defoe-like clarity forms a strange contrast to the stifling nightmare atmosphere... It is far more elusive than Moby Dick, yet the intention seems in many ways similar.”

— Eagle and Earwig: Essays on Books and Writers by Colin Wilson, p. 160

He goes on to say:

“Visiak seems to be haunted by a vision of the unsayable. Primarily he is a poet, not a conscious literary artist, although his books on Milton and Conrad reveal a keen critical intelligence. The very nature of Medusa means that, unlike Arcturus, it can never make its appeal to the general reader; but it will undoubtedly never lack a small audience of enthusiastic readers.”

— Eagle and Earwig: Essays on Books and Writers by Colin Wilson, p. 161

See my review of Anthony Harrison-Barbet's E H Visiak: Writer and Mystic for more on this writer.

You can also read a short article Visiak wrote for the Third Programme adaptation of A Voyage to Arcturus here.