The Haunted Woman is unique among David Lindsay’s published novels in having an alternative version of the text, thanks to the Daily News serial. Although there isn’t much departure between the published novel and the serial text (I’ve covered this in my article on The Haunted Woman in the Daily News), a few of the serial’s differences are, I think, worth incorporating into the novel’s text (for instance, to replace the novel’s “Isbel, drawing back a little, rested her elbow on the window-sill and her face on her elbow” with “...her face on her hand”). Other differences, including the serial’s alternative version of a confrontation between Isbel and Mrs Richborough, are included in the annotations. 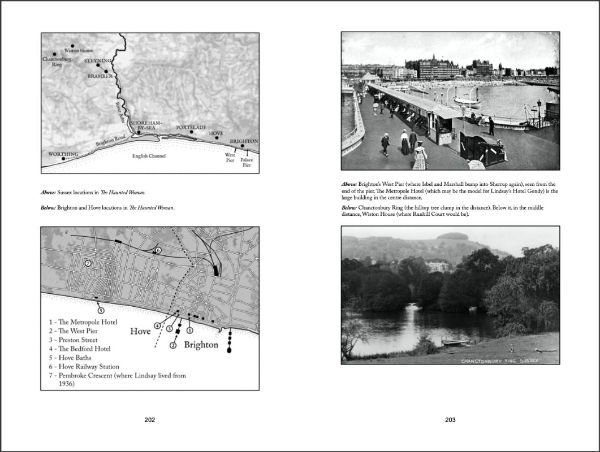 Maps and postcard images from the hardback version (due different size, these pages are slightly different in the paperback)

The annotations for this edition of The Haunted Woman started with me just looking into a few points in Lindsay’s text that intrigued me. For instance, when Marshall mentions “trolls and blendings”, what are blendings? And was all the talk about chaperons between Isbel and Mrs Richborough really something that would have concerned women in the 1920s, or was Lindsay harking back to his Victorian upbringing? I also wanted to find out more about the locations Lindsay uses. Was there really a Hotel Gondy, for instance, and if not, where might Lindsay have got that name from? Alan J Cannon, who produced an audio adaptation of The Haunted Woman for Brighton & Hove Community Radio, pointed out that where Lindsay places the book’s Elizabethan mansion Runhill Court there is an actual Elizabethan mansion, Wiston House, so how similar was that to Lindsay’s Runhill?

Once I’d decided to turn this project into a fully annotated version of Lindsay’s second novel, other points began to stand out — such as, when might Lindsay have witnessed a solar eclipse, what might the sound Isbel hears “like a telephone wire while you’re waiting for a connection” actually sound like, what was the “rubber boom” through which Mrs Moor’s husband made his fortune, and so on.

Researching these, I sought to write notes that would provide context, be it historical, cultural, or biographical, to Lindsay’s novel, connecting its story to the age it was written in, and to his body of work, in a way that hopefully will enrich the experience of reading (or re-reading) it, and so hopefully allow it to step a little out of the shadow cast by his first and most well-known work, A Voyage to Arcturus.

And, to round things off, I added an introduction on the historical setting (focusing on the state of women’s rights at the time, and how this affects Isbel’s story), an afterword about the relation between A Voyage to Arcturus and The Haunted Woman, an article on the Daily News serialisation, and eight pages of maps and contemporary images (postcards, for instance) that add context to the novel. 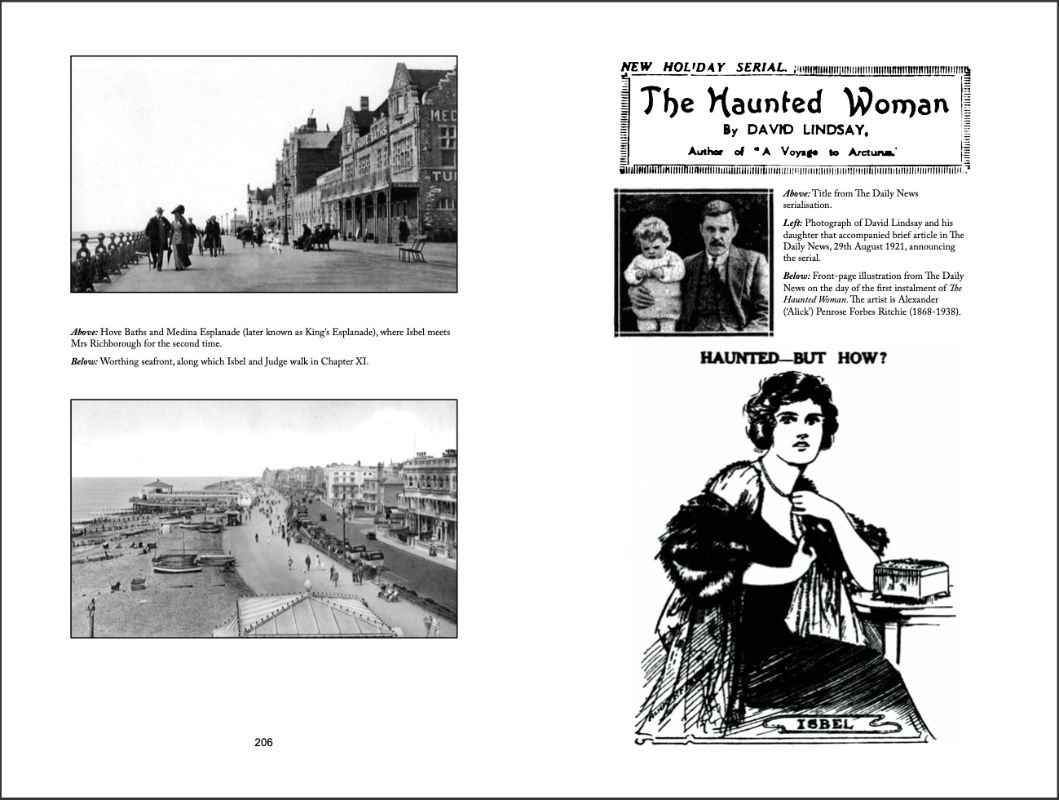 View a preview of the first chapter and some of the annotations (225k).

33. The term “blendingur” or “blendingum” (plural) in the Icelandic Grettis Saga is translated by William Morris and Eiríkur Magnússon (The Saga of Grettir the Strong, 1869) as “half-troll”. G A Hight’s 1914 translation (The Saga of Grettir the Strong), however, renders it “blending”. In a footnote to his translation, Hight explains this as “Literally, a ‘mixling’, a semi-troll; i.e., a cross between a troll and a human being.” (p. 246) In Hight’s translation, a character at one point recites a poem including the lines: “The giant-kind and the grim rock-dwellers, demons and blendings fell before me, elves and devils have felt my hand.” (p. 167) George Ainslie Hight (1851–1937) seems unique among saga-translators in rendering “half-troll” as “blending”, making it a strong possibility Lindsay read him. An academic and one-time president of the Viking Society, Hight also wrote on Wagner, and a 1906 book, The Unity of Will, Studies of an Irrationalist (E P Dutton & Co.), which was originally intended as an introduction to a translation of Schopenhauer’s works — which is notable, as Schopenhauer was another of Lindsay’s interests.

52. J M Barrie’s play Mary Rose premiered on 22nd April 1920, and so, possibly, around the time Lindsay was starting work on The Haunted Woman. It opens with a housekeeper, Mrs Otery, showing a young man, Harry, around a small Sussex manor house. The house is for sale, and currently empty. They come to a door leading to an upper-storey room of which Mrs Otery says (as Mrs Priday does in this novel): “It’s the oldest part of the house.” (Mary Rose, Act I, Scene I) Mrs Otery is reluctant to let the would-be-buyer view the room beyond, at first because, she claims, it’s locked. When Harry presses her, she says it’s not locked, but it sometimes does not open. Finally, she admits: “It’s never locked, it’s held.” The room is, in some way, haunted. It would be interesting to know if Lindsay saw J M Barrie’s play and what he thought of it, as it’s tempting to suggest he took the basic idea, of a haunted room in an empty mansion, as the seed of his second novel. (J B Pick, in his study of the metaphysical tradition in Scottish fiction, The Great Shadow House, suggests Lindsay based his character of the playwright Anthony Kerr in The Violet Apple on J M Barrie, as a means of expressing “Lindsay’s sense of the deep cynicism in Barrie’s work” (p. 53).) The rest of Mary Rose is about a woman who, at first as a child then again as a woman, disappears into a fairy realm where time passes in an instant for her, but for everyone else at first twenty days (when she was a child) then twenty-five years (when she is an adult) pass, putting a profound gulf between Mary Rose and the people who love her.

“...almost as though a solar eclipse were creeping on.”

160. Lindsay would have had the chance to observe a near-total solar eclipse on Wednesday, 17th April 1912, the largest magnitude eclipse viewable within the United Kingdom for over fifty years. On that day — which started cloudy, but was clear-skied by 9am — the first contact of the moon with the sun, as measured at Greenwich Observatory, occurred at 10:51am, and the last at 13:31pm, with the height of the eclipse at 12:11pm, being a 0.92 magnitude when seen from London (“only the slenderest possible crescent of the sun remained unhidden by the moon”, reported the Daily News the following day). The same Daily News article (18th April 1912, p. 5) describes the scene: “all over London at noon yesterday, in every street, every open space, and on every housetop, men and women gazed through bits of coloured glass into the heavens. Men stopped at street corners and maid servants climbed on to the roofs. Each ‘bus top was a miniature observatory... The offices in the City emptied and business in shops was suspended...” (As Lindsay would have been working at Price Forbes near Lloyds at the time, he would presumably have been included in this.) At least one judge adjourned court proceedings during the height of eclipse, as the event was so unusual. (And it was a welcome dose of wonder for a nation still reeling from news of the sinking of the Titanic only two days before.) The Daily News article continues: “The somewhat chilly though light wind was markedly intensified with the progressive decrease of the sun’s light and heat as the advancing moon cut off its rays, but the thermometer in the shade was only slightly affected... The gloom at mid-eclipse was of a peculiarly unnatural kind... The curious gleaming light gave to the city a twilight appearance.”

This annotated edition of The Haunted Woman is available as a hardback from Lulu.com. The paperback and ebook/Kindle editions either are, or will soon be available from all the usual booksellers.

Available from: Amazon UK, Amazon US. 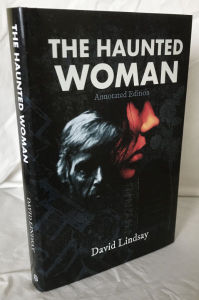 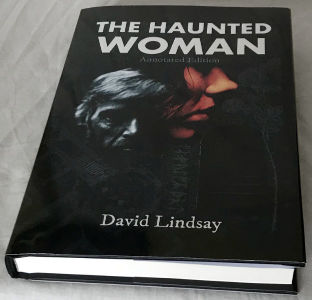 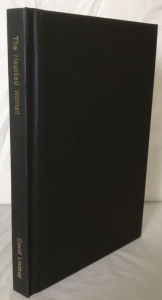