This page lists (not exhaustively, and roughly in chronological order) the major non-fiction books and articles about David Lindsay, or significantly commenting on his works. There’s a more complete reference list on the secondary bibliography page. See also the page about Colin Wilson’s writings on David Lindsay.

On Stories and Other Essays on Literature by C S Lewis
Harcourt, 1982

Lewis’s “On Stories” began life as a lecture, “The Kappa Element in Romance”, first presented in 1940. Asking what makes pure story compelling, Lewis rejects the idea it’s merely because of exciting or suspenseful events, and says that the events of the best stories create a sort of poetry that can be enjoyed even on a second, third or fourth reading, when the elements of surprise and suspense must surely be lost. He calls A Voyage to Arcturus, “perhaps the most remarkable achievement in this kind” (p. 11). The essay was first published in 1947. This collection contains a few other essays and lectures featuring brief mentions of David Lindsay, including “On Science Fiction” (from a talk given in 1955), and “Unreal Estates” (the transcript of a conversation between Lewis, Brian Aldiss and Kinglsey Amis, recorded in 1962).

It was in this “independent quarterly devoted to all aspects of Scottish literature” that J B Pick’s seminal essay took a first look at the entire body of David Lindsay’s work, and offered the first overall critical assessment outside of a book review. (Pick in fact reviews the reviews, pointing out how uncomprehending the initial reception of Arcturus was — as he would do again, in more detail, in his contribution to The Strange Genius of David Lindsay.) In this 12-page essay, Pick discusses all the works, including The Violet Apple and The Witch (from which he quotes a brief excerpt), neither of which was published at the time. He concludes by saying:

“...To find an individual Scottish novel comparable with A Voyage to Arcturus in force and strangeness — and it is in no way comparable in depth and scope — you would have to go back as far as The Confessions of a Justified Sinner. It is odd that the most extraordinary Scottish novelist of this century should have been so neglected.”

Studies in Scottish Literature began publication in 1963. Later switching to hardback, its website is here; a PDF of Pick's essay can be downloaded from it.

Collects essays by the three authors.

J B Pick contributes the real meat of the book with the all-too brief (at 30 pages) “A sketch of Lindsay’s life as man and writer”, and detailed summaries of Lindsay’s then-unpublished works, “The unpublished novels: The Violet Apple and The Witch”.

Colin Wilson’s “Lindsay as novelist and mystic” gets its first airing, being known in later publications as “The Haunted Man”. (See also the page about Colin Wilson’s writings on David Lindsay.)

E H Visiak contributes a series of short articles: “Discovering a genius” (about Visiak’s first reading of Lindsay), “Lindsay as I knew him”, “The Haunted Woman”, “Arcturus and the Christian dogma”, “The nature of Lindsay’s genius”, and “Devil’s Tor”.

A slightly expanded version of Wilson’s essay from The Strange Genius of David Lindsay, coming in at 63 pages. (For more details, see the page about Colin Wilson’s writings on David Lindsay.)

This is the single longest study of David Lindsay out there at the moment, as well as providing the most extensive biography. See the Cambridge University Press website for information and a downloadable extract.

After 50 pages or so of biography, Sellin carries out a systematic analysis of the themes in those of Lindsay’s works available at the time (The Witch and The Violet Apple are covered separately in a final chapter, as their manuscripts were in the US in the process of being published while Sellin was researching his thesis). His initial sections, “Background, settings and places” and “The human world”, prove to be the most interesting, as they cover ground not usually examined by critics of Lindsay’s work, who are naturally more drawn to the fantastic elements. Sellin comes up with some interesting points, such as the frequent presence of the theatre (in characters’ professions, including actor and playwright) and the theatrical (the séance in Arcturus, the masque in Sphinx) in Lindsay’s work. The later chapters, on “The world of Crystalman” and “The Sublime world”, going over already well-trodden ground as they do, provide interesting moments, but seem more like a series of separate comments than forming an overall view of Lindsay’s work. Sellin has a rather dry, often repetitive style, and a tendency to extrapolate beyond the strict bounds of his material: he psychoanalyses Lindsay’s relations with women too freely, considering how little is really known of his inner life, and in a reductive Freudian manner that was surely dated even in the period when Sellin was writing; he also embellishes on Lindsay’s ideas beyond Lindsay’s own words, without making it explicitly clear where he leaves the source material and begins forming his own conclusions. Nevertheless, it’s a valuable book, and worthwhile reading for anyone interested in David Lindsay.

Sellin has written other articles on Lindsay (in French), as can be seen from this entry on the University of Brest’s website.

Gary K Wolfe’s reader’s guide to David Lindsay includes a brief biography, a look at the influence of George MacDonald on A Voyage to Arcturus, a detailed look at Arcturus’ themes, plot and interpretation, plus shorter chapters devoted to The Haunted Woman and Devil’s Tor, then a quick look at Lindsay’s other works. At just over 60 pages, an excellent short critical guide, though unfortunately it has a number of small factual errors and confusions, such as getting Lindsay’s birhtdate wrong by two years, and saying that he was born both in London and Scotland.

Agon: Towards a Theory of Revisionism by Harold Bloom
Oxford University Press, 1982

This book mostly deals with noted literary critic Harold Bloom’s theory of “revisionism”, which views the work of poets and authors as being inspired by a “misreading” of their precursors. He calls one quite separable chapter “Clinamen: Towards a Theory of Fantasy” (which was in fact published separately in the critical anthology Bridges to Fantasy, (1982), edited by George E Slusser, Eric S Rabkin & Robert Scholes). This lays out a way of understanding literary fantasy, with particular focus on A Voyage to Arcturus, which Bloom says he has read “literally hundreds of times, indeed obsessively I had read several copies of it to shreds” (p. 213). Passing (and quite deprecating) mention is made of Bloom’s single attempt at a novel, The Flight to Lucifer (1979), which was directly inspired by Lindsay’s most famous work.

Bloom developed a reputation as a popular but uncompromising literary critic, championing old-fashioned values of reading for enjoyment and for the “strangeness” of classic works, as opposed to reading with regard to political and social values. In his The Western Canon (1995), a defence of the great works of Western Literature (and of the very idea of an accepted canon of such works), Bloom lists A Voyage to Arcturus as part of his prediction for the canon of the modern (“Chaotic”) age.

From the publishers of the reissue of Lindsay’s Sphinx (and from the same year), Cawthorne and Moorcock’s list of the 100 best fantasy novels includes both A Voyage to Arcturus and The Haunted Woman.

Of the poor sales of Lindsay’s first novel, it says: “If Hillary, after climbing Everest, had returned to find that everyone had been looking the other way at the time, he might have felt as David Lindsay did after A Voyage to Arcturus was published.” (p. 75)

Watson’s essay is in three parts. In the first, he looks at fantasy and “the unseen” in the work of E M Forster, “who was almost Lindsay’s exact contemporary... and whose themes resonate with Lindsay’s remarkably.” In the second, Watson looks at A Voyage to Arcturus from the point of view of “prophecy”, as defined in Forster’s Aspects of the Novel: “There is, indeed, no better instance of what Forster meant by ‘prophecy’ than Arcturus.” In the third part, despite Arcturus being, as Watson puts it, “an ‘absolute’ book which brooks no sequel whatever since it concludes so devastatingly”, he nevertheless outlines such a sequel (he at one point contacted Gollancz, asking for permission to write it), in which some of the surviving characters of Maskull’s passage through Tormance — Catice, Panawe (now transformed and renamed Weapan, a seeker after justice), and Rack (the son of Polecrab who said he’d seek revenge should his mother, Gleameil, die in Maskull’s company) — set out to revenge themselves on Maskull, unaware that Maskull is now Nightspore. Watson says: “Rack’s expedition finally overtakes Nightspore as he himself is perceiving a truth about the evolution of consciousness and the universe, a truth beyond Arcturus yet nevertheless arguably implicit in it...” Sounds like it might have made interesting reading.

Originally published by Paupers Press. Subsequently available expanded and revised as a Kindle eBook from Amazon.com (now no longer available), which covered all the published works, right up to the Fairy Play. Power takes each of Lindsay’s works in turn (opening with a section analysing Lindsay’s “Sketch Notes for a New Philosophical System”), tracing the development of his metaphysical vision. For the Kindle edition, Power also added a section on E H Visiak. 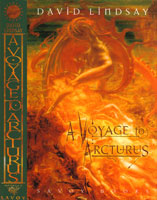 Contains a wonderfully incantatory essay by Alan Moore, “Prism and Pentecost: David Lindsay and the British Apocalypse”, as well as a reprint of Colin Wilson’s “Haunted Man” essay and a new afterword (see the page about Colin Wilson’s writings on David Lindsay).

The second edition of Sean Martin's book on the Gnostics was expanded to include a section on David Lindsay as part of its look at Gnostic themes in contemporary literature.

Caretakers of the Cosmos by Gary Lachman
Floris Books, 2013

Gary Lachman’s book, subtitled “Living Responsibly in an Unfinished World”, includes Lindsay as an “expression of the ‘two worlds’ principle in literature”: the idea that we each exist, simultaneously, in two words, our everyday “life world”, and the more value-rich imaginal world of ideas, experiences, poetry and mysticism (that is more deeply examined in his later book, Lost Knowledge of the Imagination).

Waugh’s essay collection is, as he says in the introduction, “about heroism, grandeur, and tragedy among a number of science fiction writers in the middle of the twentieth century”. It opens with three essays on David Lindsay.

“The Drum of Arcturus in Lindsay’s Strange Music” is a revised version of Waugh’s 1985 essay “The Drum of A Voyage to Arcturus” (published in Extrapolation 26, No. 2), a brilliant examination of how the three-into-four beat that Maskull first hears in the “Drum-Taps of Sorgie” plays out structurally throughout the novel.

“Lindsay’s and Goethe’s Celebration of the Pagan World” examines parallels between Arcturus and Goethe’s Faust, throwing a lot of interesting light on the much-ignored opening chapter of Lindsay’s book.

“A Speculative Dictionary of A Voyage to Arcturus” looks into Lindsay’s naming techniques, and goes on to detail some of the many possible meanings of each of the invented names in the book.

Worth reading just for these three essays alone, which are full of both large- and small-scale insights into Lindsay’s novel, Waugh’s book also includes essays on the work of a number of other authors who will interest a reader of Lindsay: Olaf Stapledon, Arthur C Clarke, Mervyn Peake, Fritz Leiber, William Gibson, James Tiptree Jr, and H P Lovecraft.

The Lament of Prometheus by John C Wright
Wisecraft, 2019 (Kindle)

In this Kindle-only short book, John C Wright examines both the artistry of Lindsay’s novel, and his own objections to its meaning and outlook. Wright provides a detailed synopsis of the book, interpretations of each of Lindsay’s invented names, and examines the symbolic and allegorical elements of the narrative, including the invented colours and new sensory organs. Wright examines Lindsay’s philosophical outlook in terms of its modernistic versions of Manichaeism, Primitivism, Hegelianism, and Gnosticism, and ultimately finds it wanting.

See here for a fuller review, and my own response to the main points of Wright’s objection.