Is David Lindsay a Bad Writer?
A Burial

“And let’s not forget David Lindsay — a wonderful writer! A Voyage to Arcturus is a masterpiece! It’s an extraordinary work, if deeply, deeply flawed...”

— from Influences at Clive Barker.info 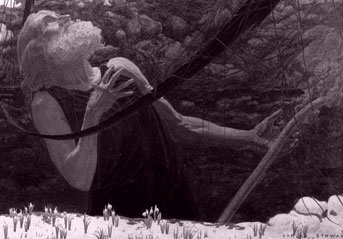 from The Grave-Digger’s Death by Carlos Schwabe

“...the man was a towering genius whose mind is cast in the same mould as that of Dostoevsky... [But] Ordinary technical ability, the literary talent that so many third-rate novelists possess in abundance, was denied to him.”

“...he produced A Voyage to Arcturus, undoubtedly one of the greatest novels of the 20th century, and arguably the greatest work of imaginative fiction of our time... [Yet] Lindsay’s prose style is awkward and amateurish; he writes like a retired maiden lady.”

— Introduction to The Violet Apple & The Witch (Chicago Review Press, 1976)

“The brutal truth is that the style is amateurish. Lindsay began writing too late to sound like a professional... [Yet] The quality of imagination is so tremendous that it becomes impossible to doubt that David Lindsay is a man of extraordinary genius.”

— “David Lindsay and A Voyage to Arcturus”, from The Books in My Life by Colin Wilson

“Some of these books are badly written, but unforgettable: Lovecraft’s stories, or David Lindsay’s extraordinary A Voyage to Arcturus.”

Badly written..! And so, the corpse of David Lindsay’s literary reputation is laid to rest, six feet down, if not deeper. Damning Lindsay in the same breath as praising him is, it seems, the done thing now, and no longer needs to be thought about. All that’s left is for the bloggers to come along and trample the grave flat by recycling the formula. Here is but one example of many I’ve seen:

“As literature, this is tosh. Nevertheless, it’s a work of epic moral grandeur, and one of the very few fantasies to do something truly original and important with the genre.”

But as we stand at the graveside, perhaps it’s time for the few genuine mourners left to say a word or two in defence of Lindsay’s battered literary reputation.

Is David Lindsay really such a bad writer?

Looking closer at the above quotes, it’s evident that what it all comes down to is style. This can only be what the writers are referring to when they say “literature” and “literary talent” and “good writing” — the things David Lindsay lacks — because everything else, “originality”, “imagination”, “genius” and “importance”, they say that he has, and in such abundance that it comes through despite his lack of this “other thing”, style.

I am not going to pretend David Lindsay is a great stylist. He isn’t. Literary style, like all creative skills, starts as technique — we can have “competent” writers, and “reliable” writers — and reaches to the heights of artistry. Yet style is only one element in literature. However we might classify A Voyage to Arcturus, be it as Romance, Fantasy, Philosophical Novel, Psychological Fairy Tale, Science Fiction, or Vision — and Vision may be the key point here, because Visionaries, those religious self-flagellators and stern correctors of other people’s morals, have never been noted for the warmth or artistry of their style, only its commanding persuasiveness — you have to admit that the major ingredients necessary to the book’s achieving its ends lie on the substance end of the scale: ideas, imagination, conviction. Style, on top of this, would just be a bonus.

Or would it even be that? Let’s consider this. What if A Voyage to Arcturus had been beautifully written? What if, for instance, it had been written by another great fantasist of the era? E R Eddison, perhaps, whose Worm Ouroborous came out two years after A Voyage to Arcturus, and whose Zimiamvia trilogy approaches philosophy. Or Lord Dunsany, who had been writing short fantasy stories since the first decade of the 20th century, but who moved to novel-length with The Chronicles of Rodriguez and The King of Elfland’s Daughter in the early twenties. Both of these writers are fine literary stylists. Dunsany’s sonorous prose was so persuasive that it became, for a while, the mode in which fantasy was written. (Ursula Le Guin calls Dunsany “the most imitated, and the most inimitable, writer of fantasy” in her 1973 essay “From Elfland to Poughkeepsie”). But could either of these writers have written A Voyage to Arcturus? Could we have had Maskull’s adventures in mock-Elizabethan prose? Or mock-Biblical?

Obviously not. Lindsay was seeking to strip the world of its illusions. Illusions are surface things; style is a surface thing. Lindsay therefore eschewed any evident authorial “style”, otherwise he would have been working against himself. There is an impulse in a certain type of writer in which the niceties of style are deliberately ignored, if not broken — in which the language is left raw, basic, even ugly or barbed — so as to make the actual substance of what they say stand on its own merits or not at all. In contrast to the more poetical fantasists of his day (who I enjoy for their very poetry), David Lindsay wrote in a cut-back style, with, at times, an almost jarring lack of flow between the sentences. Dunsany and Eddison were seeking to enchant; Lindsay was seeking to disenchant.

I don’t know if he thought about these things consciously. In fact, I’d agree with Colin Wilson in the above quotes enough to say that Lindsay was not, technically, at full command of himself as a writer (though I’d never call him third-rate, which is an over-reaction). This is made more evident in the books he wrote after A Voyage to Arcturus, where the brutalities of his natural style are out of place. But this is because Lindsay’s literary style was not so much an expression of his artistic aims, as of his deeper personality. He couldn’t change it when required, he was too earnest about his quest for the truth. Arcturus was heartfelt, and its subject matter naturally coincided with Lindsay’s style of thought, his attitude to the world, his personal forms of expression. But when he began to address more mundane situations, as we find in the later novels, two things happened. One is that the rawness of his Arcturus style was out of place in a civilised setting; it didn’t fit the sort of stories he was telling — until, that is, they moved out of the mundane, back into the visionary (which all the later novels do, but only ever in brief episodes, such as the recorded dreams in Sphinx, the haunted rooms sections of The Haunted Woman, and so on). The other thing that happened is that Lindsay’s brutal-basics style of expression struggled with the literary conventions of the society he lived in, just as his personality struggled with the social conventions. In fact, his later novels are about the struggle of inner nature against a stultifying, complacent society, and Lindsay’s style (again, I’d say, more unconsciously than consciously) reflects this: his writing becomes stuffy, as he tries to find the “right” or “nice” way of telling his stories. He cannot be himself, and he falls back on an attempt to sound like a writer, rather than to write directly from his true feelings and experiences. (And, all the worse for Lindsay, his idea of the sort of writer to sound like was, perhaps because of the lateness at which he started writing, rooted in the novels of several decades before.)

But read Arcturus, and you find Lindsay in the grip of his imagination. There’s no room for “style”, only honest reaction. You can hear him exploring, discovering, puzzling things out as he writes. The prose is direct and bold, with no frills. It is the style of a scientific-minded explorer, more interested in veracity than effect:

“The islands were mountain-summits; or, more accurately speaking, the country was a high table-land, fissured everywhere by narrow and apparently bottomless cracks. These cracks were in some cases like canals, in others like lakes, in others merely holes in the ground, closed in all round. The perpendicular sides of the islands, that is, the upper, visible parts of the innumerable cliff-faces were of bare rock, gaudily coloured...”

This is not the author as Authority, as knowing adult at the campfire telling stories to kids. It is the style of the fellow-traveller, the explorer of new lands, the guidebook writer, the asker of questions.

Is he a bad writer?

No. He is, stylistically, a limited writer. His style was perfect for the austerities and barbarous landscapes of Arcturus; elsewhere, you have to make allowances, and wait for those moments of brilliance to come through. But, for me, Lindsay’s prose style in Arcturus is like jumping into a cold stream, or testing yourself by walking against a strong, perhaps sleet-laden, wind — refreshing, revivifying, by no means warm or comforting, but certainly serving to remind you that you are vigourously alive — and this despite the lack of warmth and comfort.

Some writers are storytellers. They say, “Gather round, make yourself comfortable, listen to me and let yourself dream.” They hypnotise their willing listeners. But others, like Coleridge’s Ancient Mariner, hold you with their “glittering eye”, accost you and demand you listen, or shout at you from their battered soapboxes — not because they want to entertain you, or gain your approval, but because they are compelled by the force of their vision to wake you up to the harsh but necessary truths they have glimpsed:

Forthwith this frame of mine was wrenched

With a woful agony,

Which forced me to begin my tale;

And then it left me free.

Since then, at an uncertain hour,

And till my ghastly tale is told,

This heart within me burns.

— Samuel Taylor Coleridge, The Rime of the Ancient Mariner, from part VII

And you listen not because they are gracious or refined, but because something in what they say commands your attention. Theirs is not hypnotism, but a waking slap in the face.

“The struggle is hopeless,” muttered Nightspore.

“Did I not say I am the stronger?”

“You may be the stronger, but he is the mightier.”

“I am the stronger and the mightier. Crystalman’s Empire is but a shadow on the face of Muspel. But nothing will be done without the bloodiest blows...”