Harold Bloom’s The Flight to Lucifer: A Gnostic Fantasy

Published in 1979, The Flight to Lucifer is, in its author Harold Bloom’s own words, a novel “very much in the Arcturan shadow”. Bloom refers several times to the writing of his one and only novel in the essay “Clinamen: Towards a Theory of Fantasy” (in Agon — see the secondary bibliography page), which otherwise focuses on David Lindsay’s A Voyage to Arcturus as a means of understanding literary fantasy. He describes Lucifer’s relationship to Lindsay’s book variously as an “anxious imitation” (Agon, p. 222), a “loving but uneasy tribute” (p. 219), and even “a sequel” (p. 221), though it is not a sequel in the usual sense, as it makes no use of Lindsay’s characters or world.

It’s worth quoting the "sequel" mention in full, though, to better understand the impulse behind the writing of Lucifer:

“I don’t know how many narratives have had their genesis in a reader so loving a story that a sequel is desired, and not found, and so the reader proceeds to write the lacking sequel.”

“Clinamen: Towards a Theory of Literary Fantasy”, in Agon, p. 221

It’s perhaps no surprise that a respected academic who spends most of his time studying the accepted greats hasn’t heard of fan fiction, or such derivative works as Terry Brooks’ Sword of Shanara or the Derleth “collaborations” with H P Lovecraft, but this effect on a reader is quite common in fantasy literature, particularly fantasy which creates a world the reader wants to linger in. (It’s less usual with works like A Voyage to Arcturus, where the created world isn’t one you’d like to inhabit but, rather, fear you already do.) Arcturus had a similar effect on C S Lewis who, in recognising that Lindsay was the “first to discover what ‘other planets’ are really good for in fiction” (“On Stories”, On Stories and Other Essays on Literature, p. 12), used the literary form of Arcturus to address his concerns that the idea of spaceflight not be used as a means to escape from Earthly concerns (particularly the moral and spiritual dilemmas we have to face). But what about Bloom?

There’s an answer of sorts in the “Clinamen” essay. Bloom states his intention in writing The Flight to Lucifer as being “to assimilate Lindsay’s characters and narrative patterns to the actual, historical cosmology, theology and mythology of second-century Gnosticism.” (Agon, p. 222) Effectively, Bloom deconstructed Lindsay’s novel, settled on an interpretation of it (that it was all about Gnosticism), then set about rewriting it in the terms of his interpretation. In my view, the philosophical conclusions of Arcturus are not the source of the work’s real power — Lindsay’s novel is, I’d say, not about Gnosticism or the Gnostic outlook as much as it’s about the quest for a reliable truth in the face of radical doubt. In the grip of such a questing attitude, all revealed truths take on the look or feel of Gnosticism — or, in a more rational-minded age, conspiracy — simply because hidden truths are always found behind fearful masks (otherwise they wouldn’t be so hidden). The effect of Bloom’s approach, then, (assuming he’s not just a bad novelist — and I should say here that I greatly enjoy reading him as a critic) is to take away the real fire of the original work — the desperate quest driven by doubt — and leave behind a pallid allegory. Although, on reading the novel, I have to say that what’s left behind is much less than even that.

The Flight to Lucifer begins with the Aeon Olam (in Gnosticism, the Aeons are emanations or angels of the true God — Olam is Bloom’s equivalent of Krag) journeying through space towards Earth. Within a few pages, we have the truth about Olam’s universe laid out for us:

“The solar system, ruled by the Archon called Elohim, was as much a dungeon as any wretched stone cellar... Laws of nature, instituted by the Archon, enslaved earth’s universe and blocked even the ascent of the souls after death. The Creator or Demiurge, Ialdabaoth, miscalled Jehovah, had fashioned his entrapments most subtly.”

The Flight to Lucifer, p. 5

This information, which comes as a revelation at the end of Arcturus, is laid out, in authorial voice, on the third page of Bloom’s narrative. 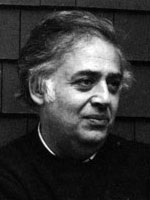 Harold Bloom, photograph by Jeanne Bloom, from the hardback dustjacket

Meanwhile, on Earth, Seth Valentinus dreams he is being called to a meeting with Olam on Krag Island (this being the one explicit reference to Lindsay’s novel). To accompany him, Valentinus calls on his friend Thomas Perscors. (The names, so much less evocative than Lindsay’s, are taken from Gnostic literature.) The meeting place proves to be a tower, and the purpose of the meeting is to set out for the planet Lucifer so as to reawaken Valentinus to his “gnosis”, or knowledge of the true nature of the universe. On the island, waiting for Olam, Valentinus takes Perscors on a cliff-edge walk to a place where, listening very carefully, they can hear ghostly sounds... The parallels with Arcturus at this point are obvious. The tower is Starkness Observatory, Lucifer is Tormance, Valentinus is Nightspore, Perscors is Maskull, the ghostly sounds are the drum taps of Sorgie. Bloom follows the plot of the earthbound part of Lindsay’s novel almost as if it were an accepted literary form.

Once the trio arrives on Lucifer (and, as with Lindsay’s novel, Perscors/Maskull finds himself inexplicably separated from his travelling companions), The Flight to Lucifer ceases to bear such close resemblance to Arcturus. It moves from being a rather obvious, and slightly dull, “anxious imitation”, to a plotless ramble through what I must assume (not having studied it as Bloom evidently has) is an attempt to embody some of the beliefs of early Christian Gnosticism. One of the formal differences between Bloom’s and Lindsay’s novel is that Bloom follows each of the three separated characters, allowing us inside Olam’s head as Lindsay would never attempt with Krag. The effect is to humanise Olam (who, being merely one of the Aeons, is not nearly as powerful nor tragic a figure as Krag), and thus to weaken him as a representation of embattled Gnostic truth. Bloom makes some attempt to give Olam Krag’s irascibility, but fails to differentiate much between Valentinus and Perscors. Pretty soon, we have three indistinguishable nobodies wandering around on a planet for no real reason (not driven by Maskull’s desperate questioning, they seem to journey simply because it’s expected of them). The quest dissolves into a series of random events: frequent battles, meetings with supernatural characters who utter a few riddles then disappear, rather too many dream sequences for a fantasy novel. In the end, as though Bloom has run out of steam, a flood arrives, bringing the trio together on an island, and forcing a confrontation with the Demiurge Saklas.

Cover to the 1980 paperback

Saklas is Bloom’s equivalent of Crystalman, but is by no means as powerful a presence. He turns up, at random, and to no real purpose, several times in the book before this final confrontation, by which time we’ve met the other members of his family. Saklas’s mother, Achamoth, as well as two other female supernaturals related to him, have been proving far more of a nuisance to Perscors than Saklas ever does, and I can’t help thinking that, if The Flight to Lucifer had been treated by its author as the first draft it feels like, he would have, in later drafts, concentrated more on the combination of enmity and attraction this female trinity evokes, rather than that of the one male, who ends up feeling more like a spoiled god-child who has created a world and wants to have it all for his own — rather like that much-parodied Star Trek plot. It’s interesting that the cover to the paperback of The Flight to Lucifer featured the image of a crystal face, even though Saklas is not associated anywhere in the novel with crystals; the cover more brings to my mind an image from Arcturus, as Leehallfae describes the appearance of the deity he searches for: “He has no back and no sides, but is all face; and this face is his shape.” (A Voyage to Arcturus, Chapter XVI) — the point of interest being that Bloom’s novel could offer no image of equivalent power, so the artist had to turn to Lindsay’s.

As if this weren’t enough, Bloom’s writing, so poetic and passionate in his criticism, is bland, unevocative, and unemotive in his novel. The world we’re moving through is by no means as fantastic or strange as Lindsay’s Tormance. Ultimately, The Flight to Lucifer is interesting not so much as a novel in its own right, but as part of the cultural history of David Lindsay’s A Voyage to Arcturus.

In his essay “Clinamen”, Bloom says:

“Still, I do not deny [The Flight to Lucifer] all merit. It does get better as it goes along, and towards its close can be called something of a truly weird work...”

I have to disagree. But elsewhere I’ve read that he subsequently disowned the book, wanting to burn all copies (though I haven’t been able to find the quote). What is a pity is that Bloom used his “wild fondness” for A Voyage to Arcturus — a novel he claims to have read “literally hundreds of times, indeed obsessively I have read copies of it to shreds” (Agon, p. 213) — to produce an imitation, rather than to write more extensively about it, or perhaps to directly promote it. After all, it’s one of the few fantasy or science fiction novels he lists in his prediction for which 20th century works will become canonical (The Western Canon (1994)) — a list which is otherwise made up of the usual literary suspects, with very little fantasy or science fiction (Wells and Peake get a mention, Tolkien doesn’t). Arcturus is certainly the most obscure work on the list, and the most in need of a champion to promote it.

In the end, I can’t help but feeling that, reading The Flight to Lucifer, I have done little more than witness the playing out of Bloom’s intense “mixture of diametrically opposed feelings” aroused by A Voyage to Arcturus, something that meant far more to the writer of the book than the reader. That said, Bloom’s essay, “Clinamen: Towards a Theory of Literary Fantasy”, is, though brief, one of the most insightful about David Lindsay’s very strange, very powerful novel, and if The Flight to Lucifer has to be accepted as psychic spin-off from the writing of that essay, then I’m happy to do so. But I certainly won’t be returning to it as I have, many times, to the originating influence.

The Flight to Lucifer: A Gnostic Fantasy

You can read the cover blurb to The Flight to Lucifer here.