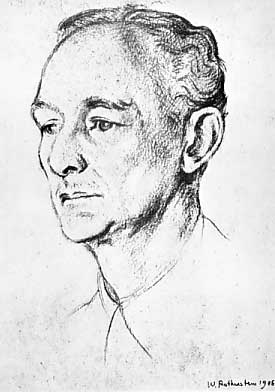 Leopold Hamilton Myers (1881—1944) was the son of F W Myers, one of the founders of the Society for Psychical Research, who made Leo’s childhood home into a centre for experimentation into the scientific verification of life after death. (F W announced the time and place he would reappear after his own death, but didn’t keep the appointment.)

Educated at Eton and Cambridge, Leo, although popular, was never one to fit in with academic circles, or the literary ones (such as the Bloomsbury group) he later fell in with. (He also corresponded with British SF writer Olaf Stapledon).

His most famous work is The Root and the Flower, a trilogy comprising The Near and the Far (1929), Prince Jali (1931) and Rajah Amar (1935). Although set in 16th century India, the books do not pretend to historical realism, and Myers stated that his main purpose was to explore problems of society and individual morality from the “vantage-point of an imaginary world”. Perhaps it was this similarity of intent — using fantasy to speak with deep seriousness about reality — that attracted him to A Voyage to Arcturus.

But Myers wrote to Lindsay on 16th September 1925, before The Root and the Flower was begun. At a time when Lindsay must have been feeling more and more that the world (the literary world, at least) was against him, it meant a lot that a respected writer should praise his work:

I don’t, as a rule, care much about books of that kind — for the reason that, to create a successful fantasy, one must possess first a strong, deep, personal intuition, and, secondly, a very powerful imagination... But your intuition was, I am convinced, strong and urgent, and your imagination seems to me to have been quite equal to its task.

J B Pick says, of their relationship:

Leo Myers was rich, elegant, fastidious, and an amorist. But despite the fact that he and Lindsay were opposites, a friendship began which continued until Myers’ death in 1941 [sic — it was actually 1944]. It was always Myers who sought out Lindsay, rather than the other way about, and towards the end Lindsay grew most reluctant to visit him. Lindsay liked good food and talk, he liked Myers, but he did not enjoy being chauffeur-driven in a Rolls-Royce through the English lanes while Myers related in a gentle, persistent tone his difficulties with women... Lindsay’s attitude to Myers was a mixture of contempt and admiration — contempt for the riches and the women, admiration for the mind and the writer. Myers’ attitude to Lindsay was admiring and impatient.

Myers took an overdose of veronal (a barbiturate sleeping drug) on 7th April 1944.

The Wikipedia article about Myers contains a list of his published books.