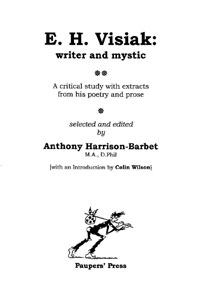 In 1970 E H Visiak, along with Colin Wilson and J B Pick, collaborated on The Strange Genius of David Lindsay, a book designed to rescue Lindsay’s critical reputation. With E H Visiak: Writer and Mystic, Anthony Harrison-Barbet (along with Colin Wilson, who writes an introduction), performs a similar service for Visiak. Being the work of a single author, this is a far more focused and in-depth analysis than The Strange Genius, which came across more as a collection of bits and pieces than a single-minded study or overview.

There are many parallels between Visiak and Lindsay, who were friends and, later, neighbours. Gollancz published Lindsay’s A Voyage to Arcturus largely at the suggestion of Visiak, whose Medusa was published with the encouragement of Lindsay. Both were writers of a strong imaginative temperament, who struggled to achieve the recognition they deserved, and both took hard blows from the publishing world. But the differences between the two writers are equally illuminating. When Visiak’s novel The Shadow was rejected by book publishers (it was included in an anthology, Crimes, Creeps and Thrills, in 1936), he all but gave up fiction writing, aside from a few short stories, whereas Lindsay soldiered on doggedly past rejections, though this never led to any greater success. But Visiak was far more of a “literary man” than Lindsay, having already published poems and essays as well as fiction. He achieved his real success with his work on Milton (and, later, Conrad). As well as editing the Nonesuch edition of Milton’s poetical works, he published a collection of critical works on the poet, The Portent of Milton. As a result, he got a civil list pension which (along with the fact that, unlike Lindsay, he didn’t have a family to support) allowed him to avoid the sort of financial difficulties Lindsay faced towards the end of his life.

E H Visiak: Writer and Mystic is a survey of Visiak’s world-view and literary work. The book starts with a short biographical essay, but aside from references to key events in Visiak’s life, the rest of this sizeable book focuses on what is to be learned about the man through his writings, and is divided into three main sections.

The first deals with Visiak’s world-view. Having come across very little of Visiak’s output before reading this volume (aside from his essays on Lindsay), I had formed a picture of him as quite different from Lindsay in outlook and basic temperament: where Lindsay was stern, Visiak seemed Romantic, more emotional than intellectual. I was surprised to find, from Harrison-Barbet’s book, that he did in fact have a very strong, and individual, philosophical outlook, whose similarities to Lindsay’s may perhaps explain how the two came to forge such an enduring friendship. If you’re familiar with Lindsay’s ideas about the Sublime, and how it, being our true spiritual “home”, is in many ways antagonistic to the pleasures of this world, you’ll immediately recognise the similarity in this quote from Visiak’s last novel, The Shadow: “Beauty is a manifestation of our oneness with the only true Source; the one Reality.” Where Visiak and Lindsay differed was where this “Source” lay. For Lindsay, it was in another world entirely, but for Visiak it was to be found most strongly in the experiences of childhood. He believed that, with adolescence, “a woeful diaphragm” intrudes between consciousness and this “Source” of beauty and happiness which had been, in his own early days, a constant, lived reality. Anyone who has read Visiak’s introduction to A Voyage to Arcturus (“The Arcturan Shadow”, originally printed in Notes & Queries, March 1940) will know that another major difference between the two is that Visiak was explicitly Christian (though Lindsay did show some sympathies with Christianity in The Violet Apple). This first section of Writer and Mystic is further divided into two sections, the first covering his purely philosophical ideas, the second his religious and spiritual ideas.

The second main section is about Visiak’s literary criticism. This covers Visiak’s theories about creativity in general, as well as his long critical relationship with Milton and Conrad. Visiak’s reaction to Lindsay’s A Voyage to Arcturus is also included.

The final section is mostly an anthology of Visiak’s writings, including essays and poems, with some commentary from Harrison-Barbet on Visiak’s development in these forms. There are several complete essays, including overviews of specific literary themes in “The Significance of Horror Fiction”, “The Island Symbol” and “The Romance of Evil”, and several extracts from a volume of essays Visiak planned, to be entitled We Old Victorians, in which he reminisced about various aspects of Victorian life. These are pleasantly digressive, and feature a lot of interesting detail about the daily life of those times which won’t be found in a standard history, covering Visiak’s own experiences of such issues as Victorian prudery, religion, and the criminal classes. The section on Visiak’s fiction summarises (and quotes extensively from) his novels, and includes an entire short story “Medusan Madness”, a subtle little numinous episode which might not look out of place besides the strange stories of Robert Aickman.

The book ends with a summary of Visiak’s final novel, The Shadow. Rather like The Violet Apple and The Witch at the time of the publication of The Strange Genius of David Lindsay, this novel is all but unpublished (unless you can find those pulpy-sounding periodicals from the thirties in which it was serialised). At the time The Strange Genius came out, J B Pick’s summaries of Lindsay’s unpublished novels were all his readers had of them; soon after, they were both issued in as complete a form as was possible at the time. Is a similar fate awaiting Visiak’s writings? It could be argued that he is, at present, even more obscure a writer than Lindsay. Only his memoir, Life’s Morning Hour, seems to be easily available, and that only on the secondhand market. But the publication of Writer and Mystic can only change this. In these days of the long-tailed internet, there’s no reason for any writer’s works to remain sequestered in silence anymore. All that’s required is a reminder of why those works are worth reading, or rediscovering. Whether it acts as an introduction to Visiak’s writings, or a companion to those who have read him before, E H Visiak: Writer and Mystic certainly achieves this. Constantly illuminating, Harrison-Barbet’s book is the sort of study every unjustly neglected author should have.

The book can be bought direct from the Paupers’ Press website.