A Voyage to Arcturus ebook

A Voyage to Arcturus ebook

As A Voyage to Arcturus is now in the public domain, and the text of the novel is freely available from Gutenberg.org, Wikisource, and other places, it has been reissued many times both by reputable publishers, and by others who’ve simply included it as part of a bulk conversion to ebook format without much care.

Here, then, I’m offering a free ebook of A Voyage to Arcturus for anyone who wants to read David Lindsay’s classic novel as a properly-formatted ebook, with a reliable text. This ebook doesn’t use the Gutenberg.org text, but attempts to reproduce the text of the first edition as closely as possible.

Full details on how this text was produced are covered in the “note on the text section” below. 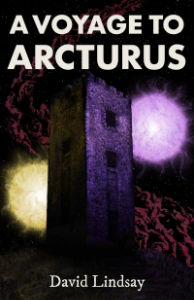 I've also made this text available as a 274 page hardback, which can be bought from Lulu.com. (Lulu frequently offer discount codes via their email list, and on the main page of their site, so it's worth checking for this, if you want to order this book.)

View a preview of the interior of the hardback with this PDF of the front matter and first chapter (184k). 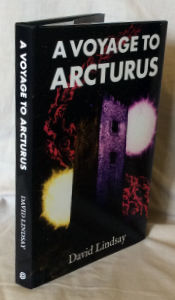 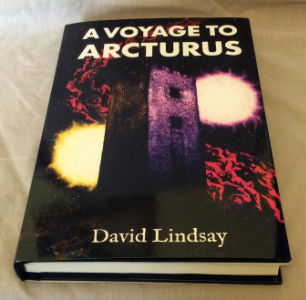 A note on the text

Most ebooks of A Voyage to Arcturus are based on the freely-available Gutenberg.org text, which itself seems to be derived from the text used in the Ballantine Books edition. This incorporates a number of edits — over 2,000, in fact — presumably intended to make it more palatable to a 1960s US readership. Most of these were very minor, being changes to punctuation (including losing a lot of the original’s hyphenations of compound nouns), paragraphing around speech, and spelling (“to-night” changed to “tonight”, for instance), but there were also changes of word order (“he was only able to withdraw his hands with difficulty” became “he was able to withdraw his hands only with difficulty”), individual words (for instance, “a mouthful of the neat spirit” became “a mouthful of the neat liquor”), and even in some cases whole phrases (“You never came from there!” is changed to “You didn’t come from there!”, as just one example).

The meaning of the text was basically unaltered. However, as 1960s-style modernisation makes less and less sense the further we get from the 1960s, and as visitors to this site presumably want to get as close to Lindsay’s original text as possible, I’ve made this ebook’s text as close as I can get it to the first edition text, eccentricities and all. (And the first edition text is occasionally eccentric. For instance, it generally uses the serial, or Oxford, comma, but not always, and in at least one paragraph uses both serial and non-serial styles. Rather than regularising these minor inconsistencies, I’ve stuck with what I’ve found in the text, except where noted below.)

Not having a copy of the first edition, I worked with a 1963 Gollancz reissue of the novel, but spent most of a day with the first edition in the British Library to check as many stylistic points as possible (the Gollancz edition sticks faithfully to the first edition text, it turned out), as well as carrying out a close comparison of the text of the first chapter, and a few other selected passages. (I found only one difference, mentioned below, in point 1.)

I have also made a few corrections where the text is obviously in error. For the truly detail-conscious, I list these below. As a lot of these were discovered after my time in the British Library, I haven’t been able to check them against the first edition, except where noted. If I ever get the time, I’ll do so.

Below I’ve quoted all the paragraphs as they are in the 1963 Gollancz text, then the change I made and the reasons for it:

They found the lady alone, sitting by the open pianoforte, in a pensive attitude. She had been playing Scriabine, and was overcome. The medium took in her small, tight, patrician features and porcelain-like hands, and wondered how Faull came by such a sister. She received him bravely, with just a shade of quiet emotion.

Replaced with gravely. Most subsequent editions of the novel have “bravely”, but this was the one textual difference I found when comparing the first chapter of the Gollancz edition with the Methuen first edition. The first edition has “gravely”, so I’ve gone with that.

For the same reason that women excel in dancing, Joiwind’s half-falls and recoveries were far more graceful and sure than those of either of the men. Her slight, draped form . . . dripping, bending, rising, swaying, twisting, upon the surface of the dark water . . . this was a picture Maskull could not keep his eyes away from.

Replaced with dipping. Most later editions of the novel include this change, as although dripping makes sense because Joiwind is at that moment walking on water, all the other words describe her movements, so dipping makes more sense.

He addressed Maskull by name, in an extraordinary voice. It had a double tone. The primary one sounded far away; the second was an undertone, like a sympathetic tanging string.

The duels of wills commenced without ceremony. Oceaxe got up, stretched her beautiful limbs, smiled, and prepared herself to witness the struggle between her old lover and her new.

Replaced with duel, in the singular. This seems right to me, but I welcome arguments to the contrary.

“Go first, Oceaxe. I must question your friend about Crimtyphon’s death. I won’t keep him,”

This paragraph ends with a comma, so I corrected it to a full-stop.

A little later on, in a narrow copse crowning a miniature, insulated peak, they fell in with a man. He was resting himself against a tree, and looked tired, over-heated, and despondent. He was young. His beardless expression bore an expression of unusual sincerity, and in other respects he seemed a hardy, hard-working youth, of an intellectual type.

Replaced with features. All the editions I’ve checked have “His beardless expression bore an expression of unusual sincerity”, but it seems odd to me that the word “expression” would be used twice so close together, and with the first instance not making sense (you can’t really have a “beardless expression”). Checking Lindsay’s other books, I found a similar sentence in The Haunted Woman: “His features bore an expression of earnestness and humility which succeeded only in still further irritating her.” So, I went with “features”.

They trudged along for an hour or more without talking. The day became overcast. A thin mist began to shroud the landscape, and the sun changed into an immense ruddy disc which could be stared at without flinching. A chill, damp wind blew against them. Presently it grew still darker, and sun disappeared and, glancing first at his companion and then at himself, Maskull noticed that their skin and clothing were coated by a kind of green hoar-frost.

Replaced with the. Most editions make this change, and it makes better sense.

All the hill-country was bare and lifeless, but this valley lying in the heart if it was so fertile, that he had never seen such fertility.

Replaced with of. Clearly a typo.

Maskull found it impossible to compute aer age. The frame appeared active, vigorous, and healthy, the skin was clear and glowing, the eyes were powerful and alert—ae might well be in early youth. Nevertheless, the longer he gazed the more an impression of unbelievable ancientness came upon him—are real youth seemed as far away as the view observed through a reversed telescope.

Replaced with aer. A typo.

Leehallfae stroked her chin and watched him with screwed-up eyes, trying to comprehend what had happened.

Replaced with aer, as this is the correct pronoun for Leehallfae.

He peered into the hole, which was large enough to admit a big man without stooping. Contrasted with the daylight outside it was dark, yet a peculiar glow pervaded the place, and he could see well enough. A rock-tunnel went straight forward into the bowles of the hill, out of sight. The valley-brook did not flow along the floor of this tunnel, as he had expected to find, but came up as a spring just inside the entrance.

Replaced with bowels. A typo.

He gazed at her mournfully, without attempting to reply, and then slowly placed her arms around her body. During this embrace he turned very pale, but Sullenbode grew as white as chalk.

Replaced with his, as this makes more sense. You can’t embrace someone else with their own arms. This is another change most subsequent editions have.

Finally, there are two places where the text of A Voyage to Arcturus is broken by a line of spaced dots, rather than simply a gap between paragraphs. In the 1963 Gollancz edition, these occur on p. 68 (after Panawe’s Story) and p. 224 (just before Maskull, crossing the Mornstab Pass with Sullenbode, hears the drum-taps again). In both cases, these breaks are indicated with 5 spaced dots. In the first edition, however, the text is divided by 7 spaced dots (after Panawe’s Story), then by 6 spaced dots (in the Mornstab Pass). Again, I’ve gone with the first edition, even if there’s no ostensible reason for this difference.