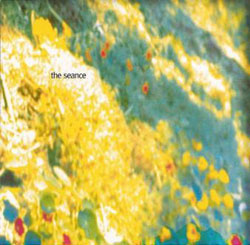 Released in 1996, The Seance is an album of fifteen tracks, fourteen of which take their name from the chapter titles in David Lindsay's A Voyage to Arcturus (the fifteenth being called A Voyage to Arcturus). There are three musicians, all on acoustic stringed instruments (Henry Kaiser on guitar, Danielle DeGruttola on cello, and Miya Masaoka on koto, along with some occasional percussion), leading to a sparse, often dissonant sound. The koto, which comes to the fore in The Wombflash Forest, has a wonderfully ethereal sound, certainly appropriate for evoking another reality (although perhaps that's just down to my Western ears), the cello is dark and haunting, the guitar often quite percussive. I wonder if this trio of instruments could be intended to echo one of the many groups of three in the book — Maskull/Nightspore/Krag perhaps or Maskull/Crystalman/Surtur, though that would surely be to tar one instrument, unfairly, with the role of the deceptive Crystalman!

The album is listed on the discographies of Miya Masaoka's website, and Danielle DeGruttola's website. It doesn't seem to be widley available as a CD at the moment, but it is available at various download sites, including iTunes

Many thanks to Paul Annis for finding this album.