Ron Thomas, Scenes From A Voyage To Arcturus 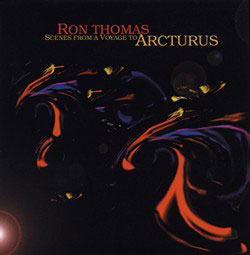 Ron Thomas’s stated aim for this album was “to articulate in music the wildness and poignancy of Lindsay’s poetic/cinematic vision.” From my limited knowledge of jazz, the closest comparison I can make to what he came up with is Miles Davis (I’m sure there’s a brief quote of a paino riff from the Bitches Brew album in “The Lusion Plain”).

There’s no point in trying to judge something like this in terms of how close it sticks to the original. Rather, you have to take on board the composer’s work as an alternative view, an interpretation or meditation adding to the possibilities inherent in the original rather than as a translation into a new form.

The more I listen to the album, the more I find this rings true. “Backhouse, the Medium at Prolands, The Hampstead” seems to be a kind of commentary, a deflation of that character’s spiritual pretensions. “Joiwind” with its gentle wind chimes could well be a soundtrack to the chapter of the same name, with Maskull waking on an alien world and meeting the woman whose skin constantly changes colour. I waited in some trepidation for the track entitled “The Music of Swaylone’s Island”, but fortunately survived the 3 minutes 52 seconds with my sanity intact.

I would have thought the temptation, when dealing musically with a work of such Sturm und Drang as Arcturus, would be to go for unremittingly dark, heavy discordancies laced with weird trills and unearthly sound effects. (Perhaps I associate it too much with Scriabin.) Ron Thomas and his fellow musicians avoid that trap and provide a brighter (though by no means less strange) view of the book. The sounds are predominantly those of the piano and jazz drums, but there are enough weirder keyboard sounds to lend the whole thing that necessary unearthly feel.

You can find out more about Ron Thomas at his website.