The BBC Third Programme Radio Adaptation of A Voyage to Arcturus 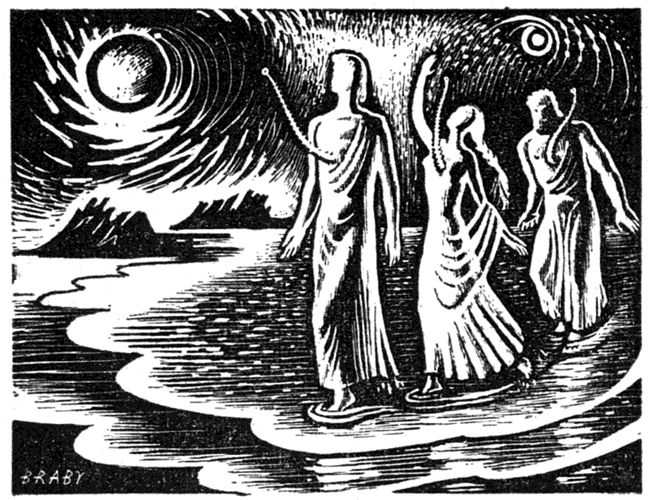 Illustration by Dorothea Braby, for E H Visiak’s article for the adaptation

On Sunday the 24th of June 1956, the BBC presented a radio dramatisation of A Voyage to Arcturus on its “highbrow” Third Programme. Starting at 8:10pm and finishing at 10:55pm, with a fifteen-minute interval roughly halfway through (during which a recording of Telemann’s Suite in D for wind instruments was played), the programme was recorded and re-broadcast the following Saturday, from 6pm to 8:45pm (this time, the interval music was Dittersdorf’s Partita in D).

Although Bernard Sellin describes it as “the reading of extracts”,[1] it’s obvious from the cast list it was much more than that, as it required 16 actors (one doubling up to play two parts), and had incidental music composed for it. Among the actors were Stephen Murray as Nightspore (later to achieve fame as Commander Murray in the long-running radio comedy The Navy Lark), Howard Marion-Crawford as Maskull (grandson of the writer F Marion Crawford, he’d already appeared in two films by Alfred Hitchcock, and would do so in David Lean’s Lawrence of Arabia, as well as a string of mid-60s Fu Manchu films), and Jill Balcon as Sullenbode (daughter of the British film producer Michael Balcon, and, later, mother to Daniel Day-Lewis). Heron Carvic, playing Panawe, went on to voice Morpho in the 1964 Doctor Who serial The Keys of Marinus, and Gandalf in a 1968 radio adaptation of The Hobbit, while Jeffrey Segal, as Sature/Catice, would appear on TV in Rentaghost and Fawlty Towers. Several of the actors’ voice-work can still be heard thanks to their film and TV appearances. Denis Goacher, who played Crimtyphon, was the Control Voice in the 1967 Doctor Who series The Macra Terror, while Olive Gregg, who played Tydomin, had uncredited voice-only parts in Carry on Spying, the 1960 Village of the Damned (dubbing the leader of the alien children), and the Hammer films Blood from the Mummy’s Tomb and Countess Dracula. (The strongest Hammer connection in the production, though, was conductor John Hollingsworth, who conducted the scores for, among others, The Quatermass Experiment, X the Unknown, Quatermass 2, The Curse of Frankenstein, and The Horror of Dracula.) It’s interesting to note that the creature of the “third sex”, Leehallfae, is played by a woman.

The complete cast list and details from the Radio Times (June 22, 1956) are as follows (I’ve provided links to more information about the people involved where possible):

‘A VOYAGE TO ARCTURUS’

The Third Programme and Radio Drama 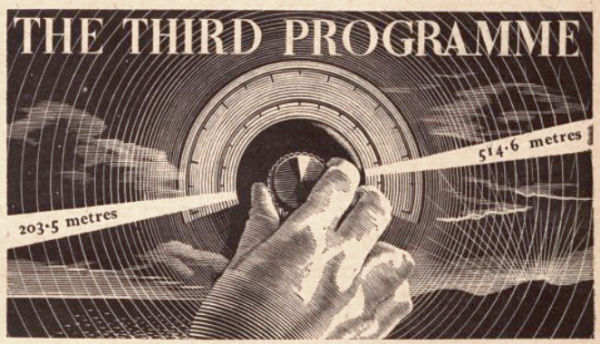 To understand what sort of production it was, it’s worth looking at the Third Programme and its approach to radio drama.

The Third Programme began broadcasting in 1946 as a more serious and cultural alternative to the BBC’s existing radio services. It presented talks on often quite academic and abstruse subjects (“Irrationalism and the Logos”, “The Theory of Social Nostalgia”, “An Empiricist’s View of the Nature of Religious Belief”, “Soviet Affairs: Labour Policy in the Soviet Union and Competitive Co-existence”, “The Alliterative Tradition in English Verse”), as well as classical music, and more serious, even experimental drama (as opposed to the light drama and comedy on the BBC’s Light Programme, which started in 1945).

In the mid-50s, radio was under increasing competition for an audience. The BBC had been broadcasting television since 1936 (with a seven-year intermission during World War II), and this received a major boost when a lot of households invested in a TV set to watch the Coronation of Queen Elizabeth II in 1953. In 1955, the first commercial television station, ITV, began broadcasting, meaning there was now, for the first time, a choice of what to watch for television-owners. In response to all this competition, the Third Programme sought to carve out its own special niche. Radio drama, it decided, wouldn’t see itself as a poor second to television drama — it wouldn’t, as producer and adaptor of A Voyage to Arcturus, E J King-Bull, said in a 1946 talk, be a “blind man’s theatre”[2] — but would turn its drama into a distinctive art-form on its own terms, incorporating, for instance, the extensive use of sound effects to tell its story. (This would lead to the formation of the BBC’s Radiophonic Workshop in 1958, whose remit was to create new sounds. They would be responsible for the realisation of the first Doctor Who theme tune in 1963.)

Perhaps the Third Programme’s most well-known work was its commissioning of Dylan Thomas’s Under Milk Wood, broadcast in 1954. Arcturus producer E J King-Bull petitioned the station’s Head of Drama, Val Gielgud (brother of actor John), to broadcast Beckett’s Waiting for Godot. (It seems King-Bull saw the play simply as a comedy, and the limits of the station’s willingness to experiment seem to have been reached when he received Beckett’s translation of the play — it being initially written in French — and found it wasn’t intended for the standard BBC “received pronunciation” accent. He wrote, in a memo: “one might seriously say that Beckett has had Irish inflections and idiom in his mind”![3]) 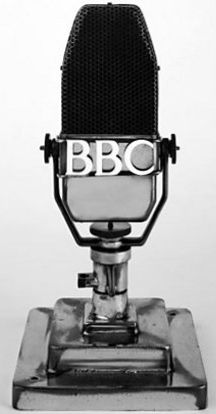 To give a flavour of the station’s output, in the same year as the adaptation of Arcturus was broadcast, the Third Programme presented Elizabethan drama (not just Shakespeare, but “the Shakespeare Apocrypha”, and also plays by John Webster, and Middleton and Dekker), and works by Ibsen, Pirandello, Lope de Vega, Brecht, Menander, Aeschylus, George Bernard Shaw, L P Hartley, and Schiller. Novels adapted around the same time include those by William Golding, Henry Green, Marcel Proust, and C P Snow.

Although the Third Programme continued broadcasting until 1967, its efforts to expand a nation’s cultural bounds were seriously constrained the year after Arcturus was first broadcast, when the channel was forced to share its programming time with a new BBC service, Network Three. The move was resisted by a hastily-formed Third Programme Defence Society, whose members included T S Eliot, Bertrand Russell, Laurence Olivier and Ralph Vaughan Williams,[4] and was even debated in Parliament.[5] But from September of 1957, Network Three would broadcast more broadly educational content intended for a wider audience until 7:45pm, leaving the Third Programme three hours each evening, from 8pm onwards, for its more niche output. It’s quite possible that, under these new conditions, A Voyage to Arcturus might not have been broadcast, or at least not at the length it was.

“I was first switched on to Arcturus by the radio dramatization of it on the BBC Third Programme in (I'm fairly sure) 1956. It was on one Sunday afternoon for about 3 hours, with haunting musical effects.”

He elsewhere refers to the production’s music as “eerie musique concrète”, and says that, when he contacted the BBC in the 1970s to learn more, he was told the script (and presumably the recording) no longer existed.[6]

Robert Harvey, writing of Lindsay’s novel in 1963, provides a more critical view of the adaptation:

“The radio production caught well enough the strange and compelling atmosphere of Lindsay’s symbolic world. But in stressing the mystery, the BBC seemed to lose sight of the meaning.”

In the Radio Times for the week in which the play was first broadcast, Lindsay’s friend E H Visiak provided a short article on the “Introducing Radio Plays of the Week...” page. Rather confusingly written, I can’t see how it can have aided anyone’s appreciation of the play (or of The Haunted Woman, whose plot summary Visiak mangles by writing that the mysterious musician seen at the end “is Crystalman”). You can read Visiak’s article here. Far more interesting is the small illustration that went with the article (see the top of this page). Signed Braby, it must be by Dorothea Braby, an illustrator of the day who often employed engraving in her work.

Eric James King Bull was born in 1897.[7] (The hyphenation of his surname to King-Bull seems to have come later. Early records, such as those relating to his wartime service, have no hyphen, and his father was Alfred Bull.[8])

During the First World War, he served in the Pay Corps, rising from Assistant Clerk in 1915 to Lieutenant-Commander in 1917.[9] In 1921, he became an Eastern Cadet at the Colonial Office, then joined the BBC in 1927, initially as part of its research department.[10] By 1930 he was a writer, producer, and occasionally presenter of radio programmes, one of his early works being Yes and Back Again, an allegorical fantasy based on Walter de la Mare’s poetry anthology, Come Hither. Later productions include H G Wells’s The Country of the Blind (1933), The Turn of the Screw (1946), Sartre’s The Flies (1947), The Hunting of the Snark (1948), Julien Gracq’s The Fisher King (1951), and The Masters by C P Snow (1958). Generally, King-Bull acted as both writer/adapter and producer. In 1961, he’s credited as the translator for a TV production of Anna Karenina (starring Clare Bloom and Sean Connery; the adaptation was by Donald Bull). This seems to be his last original credit for the BBC (there were some later repeats using his work).

He married Chloe (I’m not sure when, but there’s a 1928 radio broadcast by a Mrs C King-Bull that might be her), and the couple seem to have been friends with the poet and occultist Victor Neuburg (who was at one point the magickal partner of Aleister Crowley). Another acquaintance was Ian Fleming, who noted that Commander King-Bull claimed to be a descendent of the original “John Bull” of England.[11]

There is a brief remembrance of King-Bull here.

John Buckland was born in 1918 (or perhaps 1917), and attended King’s School, Canterbury, between 1926 and 1933.[13] (His younger brother Tim attended the same school, leaving in 1941. During the Second World War, when the school was evacuated to the countryside, the boys’ mother took over the pupils’ music education, so it’s evident Buckland came from a musical family.[14]) Early on, he was apprenticed at Ford Motor Cars, but wanted to be a composer, and sought advice from successful composers of his day, including Ralph Vaughan Williams (whose letters to Buckland can be read here), Bernard van Dieren, and Alan Rawsthorne (with whom he studied). Quitting Ford lost him the support of his well-off relatives, and he moved through some low-paying jobs to support himself during this time, including washing cars, “spying on fraudulent cinema managers”,[15] and, perhaps, work as a farm labourer. In 1942 he received a wartime commission in the army, becoming a Second Lieutenant.[16]

After the war he entered the Royal College of Music,[17] and received a positive notice in The Times for his Concerto for Flute and Strings in 1948.[18] By this point he was already working as a composer of incidental music for BBC radio dramas, his first being The Bowl of Saint Giles in 1947.[19] In 1948, he wrote music for a production of Euripides’ Electra, and the following year for a radio play, South Sea Bubble, produced by E J King-Bull. (He also provided music for a 1948 revival of King-Bull’s Walter de la Mare adaptation, Yes and Back Again.) He continued to compose music for BBC radio dramas into the mid-60s. (His production credits go on into the late 60s and early 70s, but these seem to have been repeats.)

The only other piece of music by him I have found reference to is his Opus 1, Number 1, Pietà, for String Orchestra, published in 1953. It was inspired by Michelangelo’s statue of the same name,[20] and was dedicated to the memory of Bernard van Dieren. Reviewed in the July 1953 issue of Music and Letters, it was described as “clearly the work of a man gifted with a sensitive aural imagination”.[21]

From the Ralph Vaughan Williams letters, it’s evident Buckland had an interest in socialism and folk music (including Morris dancing), and that he had sons, the first, Michael, being born in 1951.