Wandering alone on Tormance, the one inhabited planet of the star Arcturus, the hero of this remarkable story cries: â€œI must make up my mind that this is a strange journey, and that the strangest things will happen in it.â€

And the strangest things do happen in a book that is at once an engrossing science-fiction novel and a profound metaphysical fable. Now published in the United States for the first time, A Voyage to Arcturus richly deserves its reputation as a work of genius.

Maskull, the hero, is transported to the Arcturun planet where a series of mysterious adventures causes him to undergo countless physical transformations. The people he meetsâ€”some frightening, some spiritually beautifulâ€”are like none on earth, and their behavior is like that of no mortal Maskull has ever known. On this level, A Voyage to Arcturus is a fascinating science-fiction story.

Gradually, however, the reader becomes aware of a second, deeper level. It would appear that Maskullâ€™s journey is actually the journey of the human soul, caught in a death struggle between good and evil. The recurring figure Crystalman is really the Devil, engaged in a perpetual battle with Muspel, the Deity who is â€œfighting for his life against all that is most shameful and frightful.â€ The prize of victory is the soul itself, and Maskullâ€™s fantastic experiences are those of every man beset by the perils of existence as this battle rages about him.

As an adventure, A Voyage to Arcturus is enthralling. As a metaphysical puzzle, it offers a challenge to every thoughtful reader.

This edition includes an introduction by the distinguished anthropologist Loren Eiseley, author of The Immense Journey, the story of manâ€™s evolutionary journey through time. Dr. Eiseley discusses the literary merits of A Voyage to Arcturus and the metaphysical concepts on which it is based.

DAVID LINDSAY (1876â€“1945), the English author, had been making notes for A Voyage to Arcturus for ten years before it was finally written. His other books include The Haunted Woman, Sphinx, and Devilâ€™s Tor. 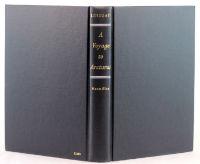