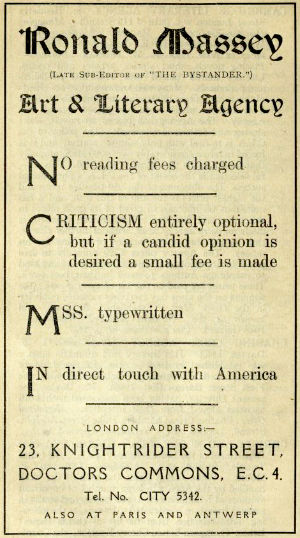 Advert for Ronald Massey’s literary agency, from The Literary Yearbook, 1921

In May 1922, when David Lindsay was trying to place Sphinx with a publisher, he wrote to E H Visiak asking if he could recommend an agent, saying he’d already had dealings with Curtis Brown and Watts and Co., “both of whom I have found somewhat lacking in zeal; but perhaps this is an experience common to all unknown authors in their relations with middle-men”.[1] The novel was eventually placed with publisher John Long by the agent Ronald Massey.[2] It’s not mentioned if Massey played a part in the publication of Lindsay’s subsequent novel, The Adventures of Monsieur de Mailly, but as Lindsay himself was submitting Devil’s Tor to publishers in the early 1930s, it’s evident the professional relationship had ended by then. This is what I’ve been able to find out about David Lindsay’s literary agent, Ronald Massey.

He was born Ronald Thornhill Edmonds Massey in 1886, in Eltham in Kent. His father, Edmonds Massey, was a stockbroker (or “stock jobber” in the 1901 Census, which recalls Lang from the first chapter of A Voyage to Arcturus). Ronald was one of twelve children.

He began as a journalist, and though this career was interrupted by ill-health (the 1911 Census finds him at the Tuberculosis Sanatorium at Mundesley-on-Sea in Norfolk), he’s reviewing books for The Bystander in 1912, and contributing a short story, “The Wedding Present”, to the 6th November 1912 edition. He at some point became the periodical’s sub-editor and art editor. The Bystander was established in 1903, presenting a light mix of entertainment, gossip, and satire. It published some of Daphne du Maurier’s earliest fiction, stories by Saki, and the wartime cartoons of Bruce Bairnsfather. (It also featured a good, though slightly delayed, review of A Voyage to Arcturus from Ralph Straus in February 1921.) It merged with The Tatler in 1940.

Massey served in the Royal Field Artillery in World War I, becoming a Lieutenant, and married Thérèse O’Sullivan in 1921, whose father, like Robert Barnes’s, had worked at the Royal Arsenal. The couple had two sons.

As an agent, Ronald Massey had his offices initially at 23 Knightrider Street, EC4, and from the mid-1920s at 106-108 Victoria Street, SW1. And he wasn’t just a literary agent. The 1926 edition of Who’s Who in Literature, for instance, lists him separately under British Literary Agents, British Art Agents, and British Dramatic Agents. A 1926 advert proclaimed his to be “The only British Agency in Los Angeles, Hollywood, the world centre of the kinema industry”, and another specifically asked for authors with film rights for sale.[3]

It’s evident that being an agent meant more than placing works with publishers. I’ve found several items online which were actually published by Ronald Massey, including, for instance, a November 11th 1924 menu for an “Armistice Dinner & Dance” at the Hotel Cecil, illustrated, designed and printed by Massey’s agency. He also printed advertising posters, including many for shipping lines by Harry Hudson Rodmell (1896–1984), an artist noted for his paintings of ships. The agency, Ronald Massey Ltd, would describe itself in the later 1930s as an advertising agent.[4]

By this point, however, it was no longer Massey himself at the helm, as he, sadly, took his own life in 1932, at the age of 46. His company continued until 1946, when a winding-up notice was placed in The London Gazette.[5] 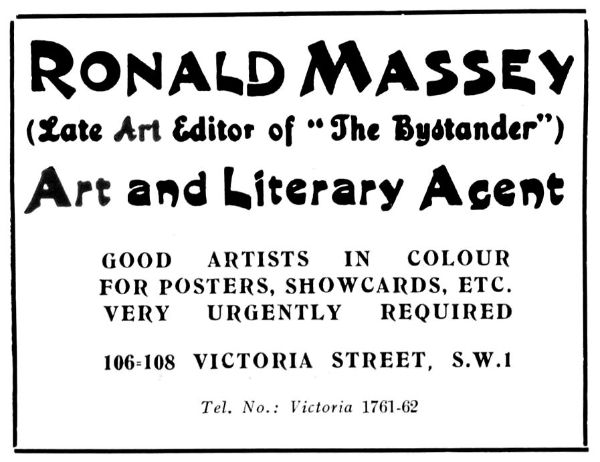