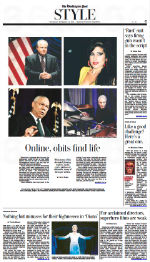 In his latest book column for The Washington Post (18th November 2021), Michael Dirda has written about David Lindsay's A Voyage to Arcturus. Putting it in the same category as other works which are "metaphysical in nature and strive to convey some sort of complex, even ineffable vision", such as George MacDonald's Phantastes and Lilith, Algernon Blackwood's The Centaur, Samuel R Delaney's Dhalgren, and Dante's Divine Comedy, all of which he calls "exceptionally challenging", Dirda says that Lindsay's novel is "deservedly regarded as titanic, the depiction of a spiritual rite of passage that interlaces death and renewal with a quest for transcendence". You can read the full article at The Washington Post online.

Dirda also remarks how surprising it is to find androgynous and hermaphrodite characters in a novel from 1920 (though I'd disagree with his classing Leehallfae as bisexual, which would surely require aer to be from a race with two sexes; rather, ae is asexual, with mystical complications). The one thing I'd say is a pity is that the article is headed with the details of Bison Press's edition of Arcturus — an edition that announces its intention to mangle Lindsay's text with a misspelling on the cover, and goes downhill from there. (Unless they've improved the text since I reviewed it here in 2002.)