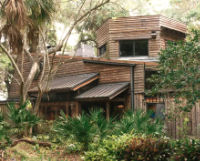 The July/August issue of the home design magazine Dwell contains an article ("The House That Helped Build the Modern Psychedelics Movement" by David Banks) about a house built by Rick Doblin in 1975 which became a home for his Multidisciplinary Association for Psychedelic Studies (MAPS) from 1998 to 2006. He named the house Arcturus after David Lindsay's novel A Voyage to Arcturus. As he explains in the article: "I felt like building a house was this spiritual journey as well."

Situated in Sarasota, Flordia, there's not much about the house that directly recalls Lindsay's novel, apart perhaps from the fact that the master bedroom has a tower-like observatory (or "a turret with windows all around that also connects to a sundeck" as the article describes it) above it. (Doblin: "The master bedroom was where I thought the main trips would take place.") The MAPS site, in an article from when they moved, describes the house as "a psychedelic, handmade art house, practically a living organism, with walls of cedar and granite that soar to skylights and rainbow-colored stained glass depicting a cosmic Eden on a turtle’s back."